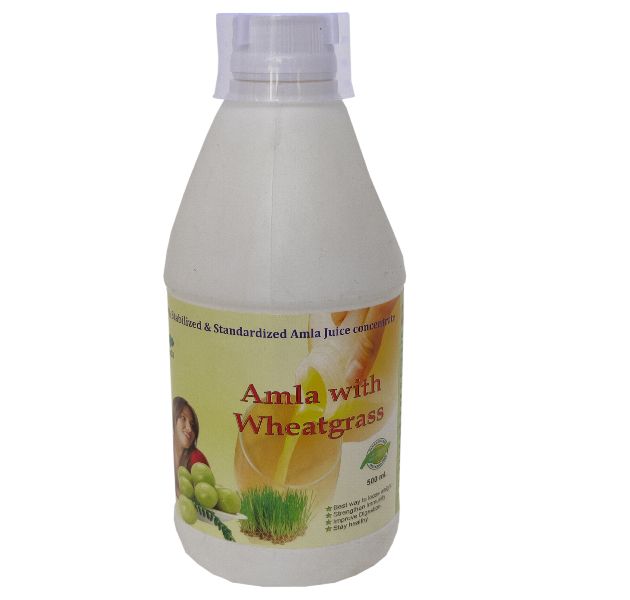 Natural Amla Wheatgrass Drink is packed with mouthwatering lychee flavor and combined  Wheatgrass with Amla Juice and Pulp. This drink is great to rehydrate re-energies and revitalize naturally.Amla  juice is an extremely popular beverage, and it has become even more of a phenomenon in recent years, as more studies are done on the active ingredients, nutrients, and health potential of this plant juice. The most important components of the leaves of this plant are saponins, amino acids, beta-carotene, vitamin C, vitamin B, vitamin E, lignins, and other minerals and enzymes.Amla  juice is made from the leaves of the Amla  plant, and unlike processes to acquire the extract of this plant, the juice is made by crushing, grinding, and blending the entire leaf. After several filtering steps, the juice can be consumed for its concentrated  nutritional values. While the smell of this plant can be potent, the juice is quite mild and easy to drink, which is why it has recently become so popular as a health supplement or dietary drink.Wheatgrass Wheatgrass is the young grass of the common wheat plant called tritium aestivum.  This (gluten-free, of course!) edible grass is either juiced into a “wheatgrass shot,” or milled down into a fine green powder that’s used to create a multipurpose product for both humans and animals. Wheatgrass can be consumed on its own, or used in combination with other juices or supplements. Now considered to be a “super food,” Which type is best? The best way to consume all foods is as close to their natural as possible. For wheatgrass, this means that drinking it in juice form . Wheatgrass Nutrition Facts Some experts claim that wheatgrass contains over 100 different elements needed by man. One of the most noticeable (and important) nutrients in wheatgrass is chlorophyll. Chlorophyll is the substance that gives wheatgrass its signature, bright green color. Like other nutrient-dense greens, it’s used in the human body for a number of important processes: It’s a natural liver cleanser and detoxifier, acts like an antioxidant to reduce free radical damage, is a blood strengthener (it has a similar chemical composition to that of hemoglobin,) and can help give you a boost in energy. But chlorophyll is not all wheatgrass has to offer. Wheatgrass benefits also include being loaded with amino acids (the building blocks of proteins), enzymes which are needed for digestion, and many vitamins and minerals needed for disease-free living. Wheatgrass is rich in the following nutrients : Chlorophyll Antioxidants like flavonoids and phenolic acid Iron Electrolytes including magnesium and calcium Amino Acids Vitamin A Vitamin C Vitamin E Selenium ACI Amla   Wheatgrass  juice is endowed with marvelous healing properties and when taken internally helps in treating many ailments. ACI Amla   Wheatgrass contains many minerals vital to the  growth process and healthy function of all the body's system. The juice should be drink daily as a general tonic for strengthening immune system , They have many benefits for digestive system problems, such as  colitis, gastritis, colonic irritation … they heal and detoxify. The combination of Wheatgrass  and Amla  soothes inflammation, reduces pain, Helps Prevent Anemia, Maintains Blood Pressure and Cholesterol,  Boosts Immunity and . They are an excellent remedy for constipation. and help it to fight illness of all kinds.